Michele Soavi’s 1987 film STAGEFRIGHT is a favorite to many horror aficionados and now the Italian classic gets the Blu-ray treatment from Blue Underground with this release and boy oh boy, does it look better than ever.

Following a somewhat troubled musical number that ends up being quite the deadly experience, STAGEFRIGHT establishes an excellent tone from the very beginning, setting forth a downright beautiful look full of color and style, before even getting to any real danger within the film’s plot. By the time the film’s heroine twists her ankle and heads to a psychiatric hospital to get it fixed (strange I know) we’re already on board with not only the look of the film, but also its characters, a group of needy and overly dramatic theater actors who each bring a really fun presence to the film. Soon after arriving at the hospital, one thing leads to another and a mental patient, guilty of slaughtering a dozen people, escapes and hitches a ride back to the theater, where the troupe is being subjected to an intense rehearsal by the show’s director.

Everything leading up to that point in the film, is all about setting forth that tone and feeling, allowing STAGEFRIGHT’s viewers to get hooked into a question of what’s coming next. What does end up coming, next is that the entire group gets trapped inside of the theater, with the killer hiding within and he soon dispatching them, one by one.

What sets STAGEFRIGHT apart from every other slasher film released at the time, is how tense it can feel, all while also feeling very playful and visually striking at the same time. It’s one of the few great horror films set within a theater-setting (Bava’s DEMONS and Herrier’s POPCORN also sitting comfortable side by side with it), something that gives you as a viewer a very confined and sometimes claustrophobic feelin. Topped with some excellent kills, with everything from axes, chainsaws, drills and everything in between used as ways to off each cast member one by one, STAGEFRIGHT also boasts one unforgettable killer, wearing an owl-head costume while chopping people to pieces, and trying to stage his own stage piece. It’s one of those horror films that really stands out in pretty much every capacity, with a fun plot, over the top performances, great kills, and last but definitely not least, an excellent electronic-based score by Simon Boswell (DEMONS 2, SANTA SANGRE).

Blue Underground really did one hell of a job with STAGEFRIGHT’s Blu-ray debut, as it looks absolutely stunning in high definitely, making those beautiful colors and shots stand out even more than they always have. Add the disc’s 5.1 DTS sound to it, and you’ve got by far the best the film has ever looked and sounded. Also on the disc, is over a half dozen interviews with everyone from Soavi himself, to stars of the film, make-up effects artist Pietro Tenoglio, as well as composer Simon Boswell. Each interview is well over the ten minute mark and not a single one feels like the short EPK’s that fill up so many releases these days.

Whether you’re a longtime fan of STAGEFRIGHT or if you’re just in the mood for something new, this is one hell of a release and something that should be in every horror fan’s collection. 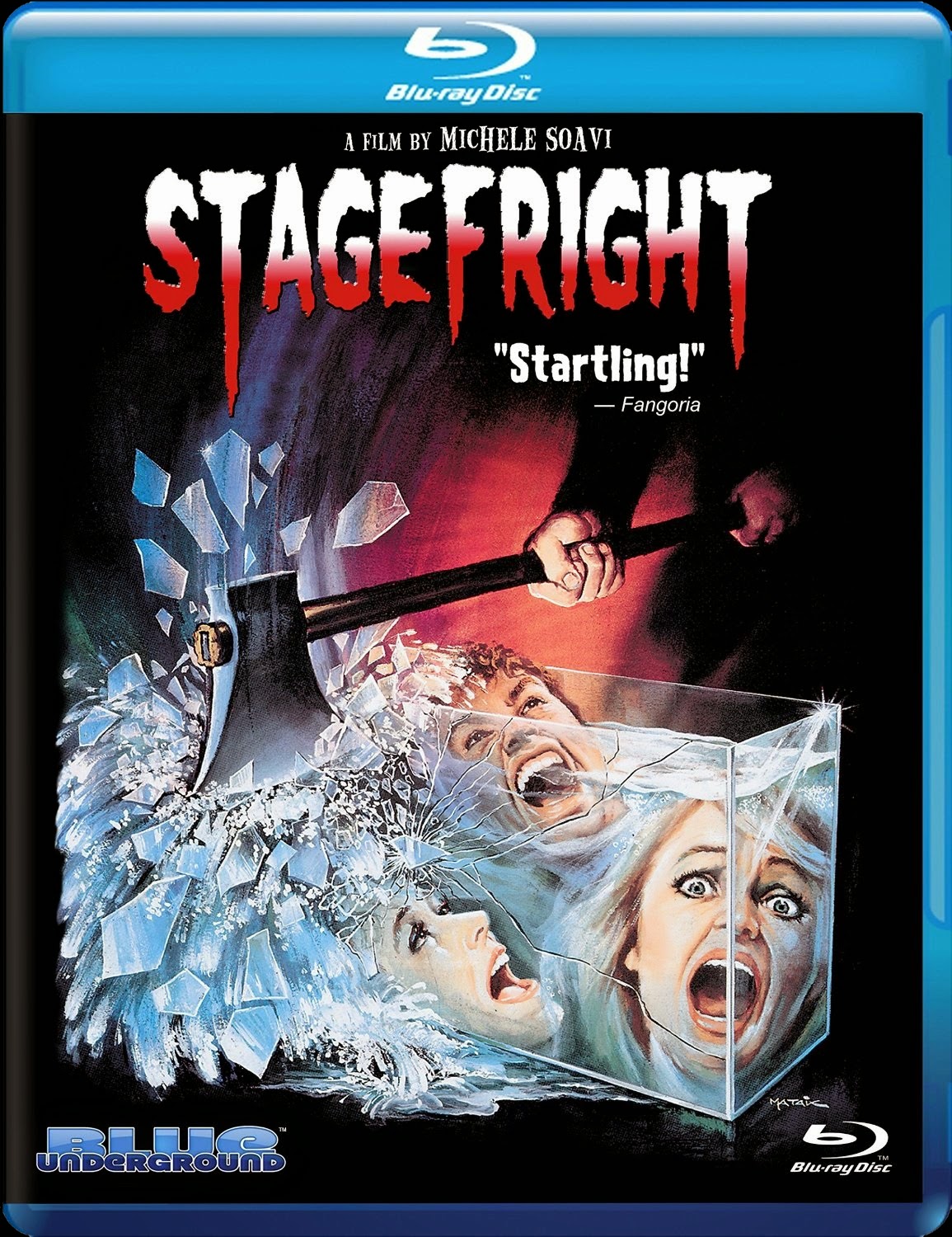